Physiotherapy and the Growing BC Community 1980-1999

Physiotherapy in BC began to grow and advance quickly along with the community's needs.

The 1980s were a busy time for PABC as in 1982 a permanent office space was established. The emergence of a distinct curriculum of occupational therapy and physiotherapy began in 1983 with the division of the two programs at UBC. 1984 saw the publication of the Department Planning Manual by PABC. The Health Statutes Amendment Act, 1987 and the Health Professions Amendment Act, 1989 were created. For National Physiotherapy Week in 1989, for PABC’s main event the Vancouver Cable Cars played a team of celebrities from sports, media and the public in front of a crowd of 600 in UBC’s War Memorial Gym raising $1,000 for wheelchair sports. The Physiotherapy Re-entry Program students at the Open College (OLA) graduated in 1989. The Physiotherapy Manpower Task Force was established in 1989 to continue the work of the former PABC Manpower Committee. The purpose of the committee was to recommend means or strategies by which the present and predicted manpower shortages of physiotherapists in BC may be resolved.

By 1992, the School of Rehabilitation Medicine at UBC had changed its name to the School of Rehabilitation Sciences. The Health Professions Act was further developed and APMP became The College of Physical Therapists of British Columbia (CPTBC) on December 16th, 1994 and exists to serve the public while supporting physical therapists to deliver quality, safe and ethical physical therapy. All physical therapists were now given primary access. The Health Professions Act acts as an umbrella legislation that provides a regulatory framework for health professionals in British Columbia and designates physical therapy by regulation as a health profession. March 30th, 1996 marked a significant day in the history of PABC. The memberships of both the Physiotherapy Association of British Columbia and the British Columbia Association of Physiotherapists in Private Practice voted to amalgamate the two associations.

Scroll all the way down to see Physiotherapy news clippings from the 80s and 90s.

In 1980, with one leg having been amputated due to cancer, he embarked on an east to west cross-Canada run named a Marathon of Hope to raise money and awareness for cancer research. Sadly unable to complete his cross country run due to a recurrence of his cancer, he returned to Vancouver for treatment. He passed away peacefully in 1981 but his amazing legacy lives on.

The Marathon of Hope is held every year as a volunteer led, all-inclusive, non-competitive event with no fundraising minimums. The annual Terry Fox Run has grown to involve millions of participants in over 60 countries and is now the world's largest one-day fundraiser. Millions of $ have been raised for cancer research. To this day, thousands of school children across Canada participate each September and it has become an international event in which people from all over the world participate in their own local Terry Fox Run.

Rick Hansen, born on 26 August, 1957 in Port Alberni, Canada, is a Disability Activist and former Paralympian.

Inspired by the courage of his friend Terry Fox, Hansen decided to undertake a similar journey to prove the potential of people with disabilities and to inspire a more accessible world. But his planned path was far more ambitious: he planned to circle the world in his wheelchair. At his side throughout the Man in Motion Tour was his physiotherapist, Amanda Reid, who later became his wife. Rick Hansen is currently president and CEO of the Rick Hansen Foundation, established in 1988, which has generated more than $200 million for spinal cord injury-related programs.

The vision of the organization is to create an inclusive world where people with disabilities can reach their full potential. Through programs, collaboration and leadership, the Foundation has increased awareness and solutions for the barriers people with disabilities face, created more accessible spaces, improved the quality of life and health outcomes for people with spinal cord injuries, mobility issues and other disabilities.

1985 to 1987 Man in Motion Tour by Rick Hansen From March 21, 1985 to May 22, 1987, Rick and his team wheeled over 40,000 km through 34 countries raising awareness about the potential of people with disabilities, creating accessible and inclusive communities, and finding a cure. 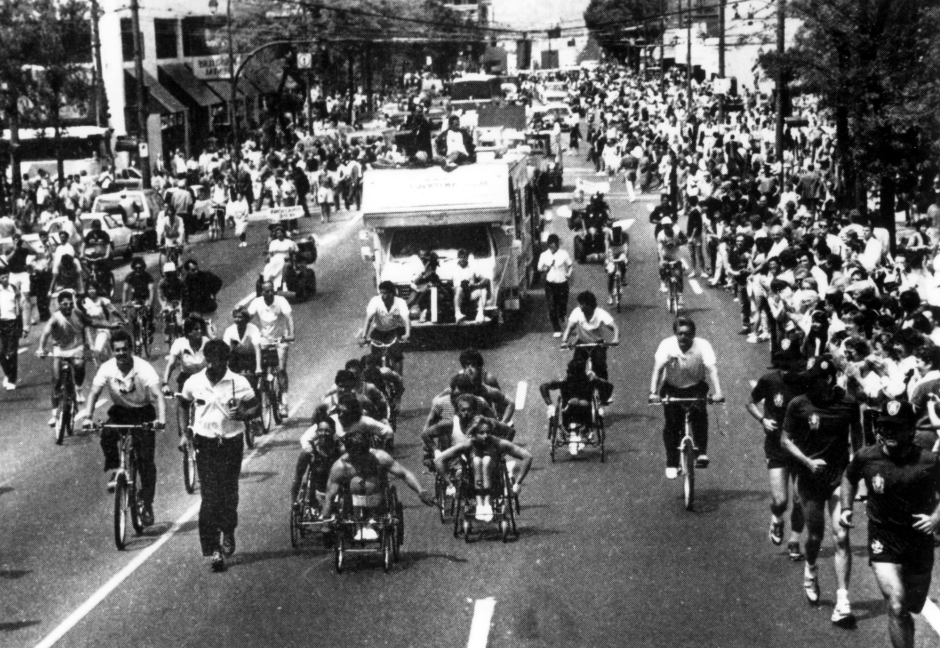 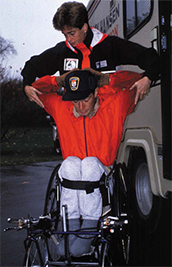 From March 21, 1985, to May 22, 1987, Rick and his team wheeled over 40,000 km across 34 countries, raising awareness about those with disabilities, the need to create accessible and inclusive communities, and finding a cure. Amanda Reid (Hansen) was the team physiotherapist. She worked as a physiotherapist specializing in spinal cord injury and wheelchair sports at G.F. Strong Rehabilitation Centre. It was there that she met the young wheelchair athlete Rick Hansen. “Physiotherapist in Motion: Exploring New Frontiers” is her story of this incredible odyssey.

By the mid-eighties, there were an increasing number of vacant physiotherapy positions throughout the province of B.C.

A Joint Industrial Adjustment Committee was formed with representation from BC Health Association (BCHA), PABC, APMP Part 1, Open College Component of OLA, Federal Government: CEIC Labour Market Services, and the Provincial Government: Ministry of Advanced Education and Job Training. It was agreed that British Columbia would conduct the Alberta Physiotherapy Re-Entry program as a pilot, and an Agreement was made to run the B.C. Re-Entry Program under the auspices of the Open College, at the Open Learning Agency (OLA).

Sixteen Re-Entry OLA registrants successfully completed the course. The newly minted Physiotherapists all went on to be registered as Active members of Part I of the Association of Physiotherapists and Massage Practitioners (APMP) and became employed in their local workforce, greatly helping to ease the Physiotherapy Manpower shortage in B.C. in 1989.

There were many changes in the scope of practice for physiotherapists in BC over the decades from 1980 to the present.

Take a look at this news article prepared by two of our long-standing members for HISTORY.PHYSIO

In 1984 the BC Association of Physiotherapists in Private Practice was incorporated under the Society Act and received Certification of Incorporation from the BC Ministry of Consumer and Corporate Affairs.

The purposes of the Society are:

Later in 1996, PABC members and the members of BC Association of Physiotherapists in Private Practice voted to join forces. 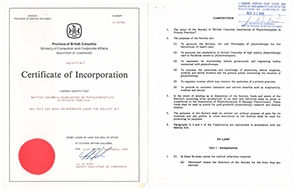 “At the Helm” was held in Vancouver, B.C. from June 11 - 15 at the Vancouver Hotel, with the Opening Reception being held at the newly expanded Vancouver Art Gallery and a fun welcome gathering at the Vancouver Aquarium. The audience was treated to a speech by Dorothy Glover then Director of Physiotherapy at Burnaby General Hospital.

1985 marked the first Annual National Physiotherapy Week in British Columbia. A series of lectures were held at various recreation centres including the YMWCA. 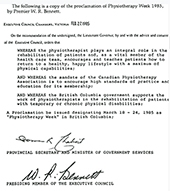 The public was notified of the event in various ways including newspapers, a roving radio reporter interview with CPA District President, 5000 pamphlets advertising the talks were distributed, and more... 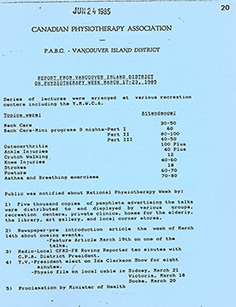 Physiotherapists started looking for new options for their treatment skills because they had patients with pain who were not helped with exercise, manual, electromagnetic or massage techniques. In BC, in the eighties and nineties, there were courses offered from a variety of sources; Dr. Chan Gunn, with iStop or Dry Needling, the Acupuncture Foundation of Canada Institute (AFCI), the Upledger Institute with Craniosacral Therapy, Zero Balancing, and other complementary and alternative medicines including Healing and Therapeutic Touch.

Read all about how these PT's embraced these new techniques and pioneered the way for an expanded scope of practice.

Growth of Physiotherapy Departments and Services in BC in the Eighties

Extended Health Care Units were being built; there were new buildings for the UBC Faculties teaching hospitals including the B.C. Children’s Hospital, the Children’s Variety Research Centre, Grace Hospital, the BC Cancer Agency; while St. Paul’s Hospital and the Vancouver General were undergoing extensive redevelopment. There were more than sixty hospitals in the province; many of the older hospitals throughout the province had created Physiotherapy Departments in the basements; in the old Salmon Arm Hospital, the Physiotherapist had her office and treatment area in a disused linen cupboard! Now with the increasing use of physiotherapy and occupational therapy, rehabilitation departments were being built above ground to facilitate ambulatory care.

Enjoy some personal accounts by physiotherapists practising over the years including the 80s and 90s while changing the lives of many patients in British Columbia. 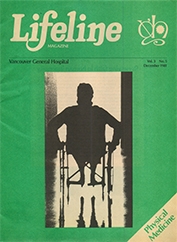 Please keep sending stories about your careers and physiotherapy in your communities through to pthistorybc@gmail.com

Designing and Renovating Physiotherapy Departments: A Guide for Planning, Equipping and Staffing

“The Department Directors worked on Quality Assurance for many years. This was a huge project involving hospitals and professional health associations across Canada. It was a complex subject involving many aspects of departmental organization and patient care. We achieved autonomy as we gradually incorporated the various aspects of Quality Assurance into the management of our Departments.

In the early 70s and 80s new Physiotherapy Departments began to spring up out of basements all across Canada. The Directors Group asked Patricia Grohne, Ruth and me {Brenda Tillotson} to write a booklet on Department Planning. Ruth would pick me up and drive us to Pat’s home for lunch where we’d discuss the book content. We decided planners needed to know how to develop a functional plan based on quality assurance as well as understand architectural terms and project planning. Ruth left us to write the book after she was sure the content was what was needed. “Designing and Renovating Physiotherapy Departments” was published by P.A.B.C in 1984.”

- Brenda Tillotson, at the “Remembering Ruth” Memorial for Mrs. Ruth Fortune in 2012 .

The final publication of the Department Planning Manual took place in 1984 with the preparation, production and printing taking a total of six years with many volunteers being involved. It was well received by the Physiotherapy Community and had a favourable review in the CPA Publication, Physiotherapy Canada May/June 1986 Volume 38 No. 3. On completion of the manual, a copy was sent to Canadian Cataloguing in Publication Data and the manual was registered as ISBN 0-9692125-0-X. With a grant from the Woodward Foundation, a total of 400 copies were printed and mailed out on request with the cost set at $39.95 plus shipping. The format was as a 3-ring binder to allow for the addition of additional notes by the individual user. No reprints have been made. Since the time of publication of the Department Planning Manual, information on planning and architecture has continued to become much more readily available through the internet.

In July of 1985, the APMP Part 1 Standards Committee met to discuss the Standards for treatment facilities and ongoing preparation for accreditation continues to this day.

Designing and Renovating Physiotherapy Departments in BC 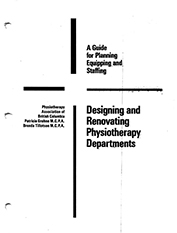 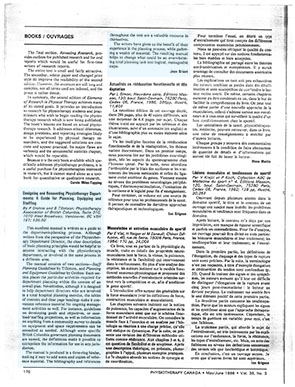 Physiotherapy in the News

‘Rebuilding shattered minds’ (The Sun, 1983)
In physiotherapy, Tamara Lloyd, 23, is learning how to use her right arm again after cracking her head against the steering wheel in a head-on car collision in July 1982. She needs many hours of physiotherapy to restore motor control after emerging from a coma 3 months after the accident as her brain no longer remembers how to signal the muscles of her arm and hand to perform the natural reflex of grasping a glass. 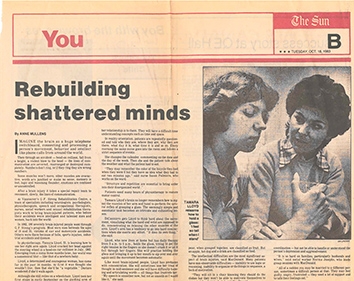 ‘Physios join in melanoma detection’ (BC Medical Association News, 1997)
The Physiotherapy Association of BC (PABC) agrees with Dr. Avelar that physiotherapists can be an important line of defense against skin cancer. PABC sponsored a campaign to educate physiotherapists on how to detect suspicious moles and other skin growths. 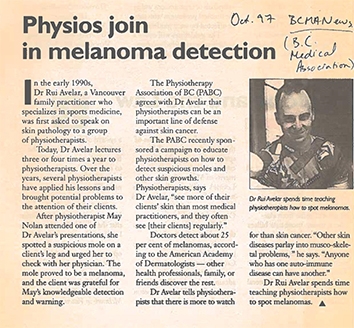 ‘Pain killer for Pan Am athletes’ (The Daily Courier, 1999)
Randy Goodman, a Westbank physiotherapist will offer his services as a member of the Host Medical Committee at the Pan Am Games in Winnipeg. He will provide care for all athletes, not just a single team, in gymnastics, track & field, and wrestling.
Why sports physio?
“My inspiration to become a sports physio came from the physios who worked with me as an athlete (DíArcy Bain, Laurie Urban etc.) I saw how important and successful they were in managing my injuries and how committed they were to excel in their profession." 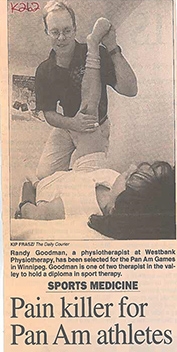 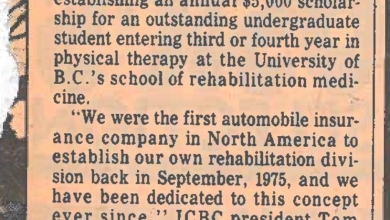 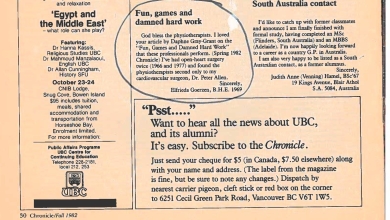 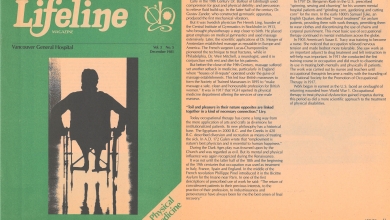 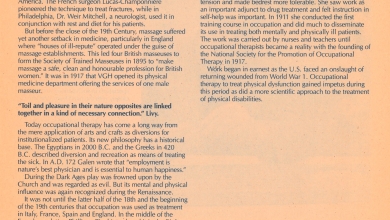 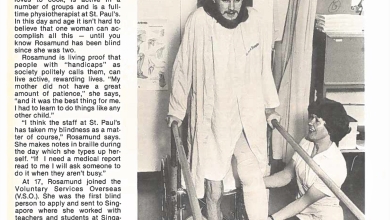 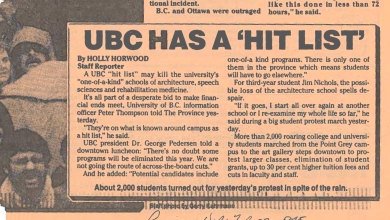 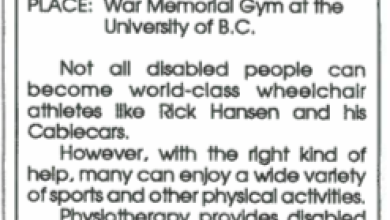 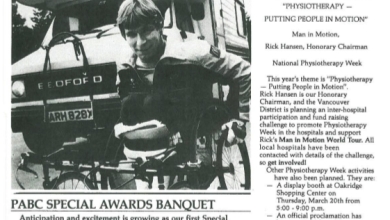 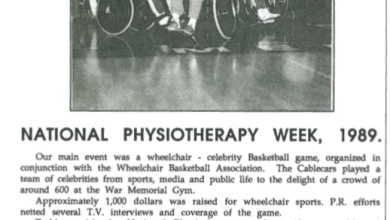 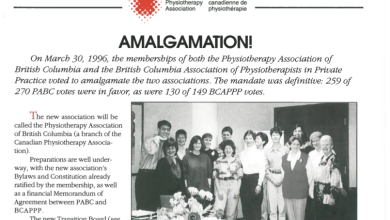 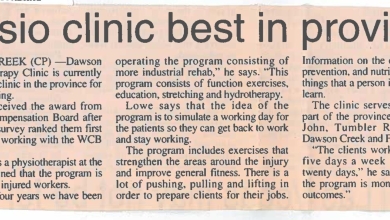 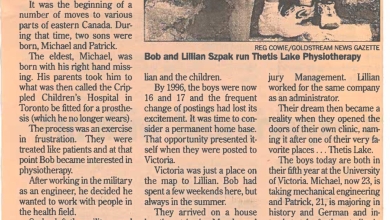 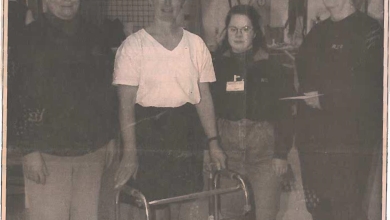 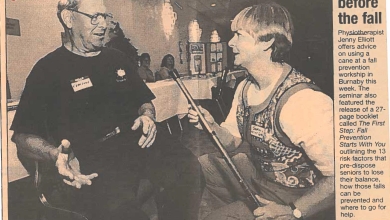