Inspired by the dream of creating an accessible and inclusive world and finding a cure for spinal cord injury, Rick Hansen set out on a journey that would make history – the Man In Motion World Tour. 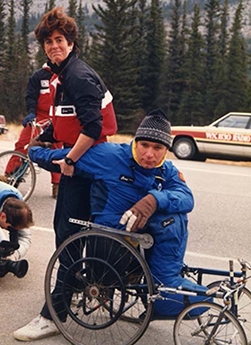 From March 21, 1985, to May 22, 1987, Rick and his team wheeled over 40,000 km through 34 countries, raising awareness about the potential of people with disabilities, creating accessible and inclusive communities, and finding a cure. Amanda Reid (Hansen) was the team physiotherapist. Graduating from the School of Physiotherapy at Queen’s University in Kingston, Ontario, in 1981, Amanda moved to Vancouver, where she worked as a physiotherapist specializing in spinal cord injury and wheelchair sports at G.F. Strong Rehabilitation Centre. It was there that she met the young wheelchair athlete Rick Hansen. “Physiotherapist in Motion: Exploring New Frontiers” is her story, in her own words, of this incredible odyssey. The challenges of keeping Rick wheeling through devastating injuries, illnesses, and at times almost insurmountable physical, mental and emotional obstacles are at the centre of her writings. This is a story of hope and inspiration.

Read further in the excerpt below and find the full story linked at the end of the excerpt.

The Rick Hansen Foundation (RHF), established in 1988, is part of the Man in Motion World Tour legacy. For over three decades, RHF has raised awareness, changed attitudes and funded spinal cord injury research and care.

The Man in Motion World Tour became a reality on March 21, 1985. I was, at the time, part of the five-member medical team led by Dr. Jack Taunton that launched Rick off with medical equipment and written instructions providing the crew with the means to ward off minor problems. We felt we could afford to wait and send a rotation of therapists to join the team in the countries where accessing medical care would be more difficult. Three days into the tour, however, I received a phone call from Rick. In answer to the usual opening line of "How's it going?" Rick flexed and extended his wrists over the phone. "Not too good," he replied nervously. The creaking and squeaking of his wrists were all I needed to hear. We had made a significant error. We had not planned for 0° temperatures, 40 mph headwinds, rain, and snow that threatened Rick as he attempted to climb the already gruelling coastal ranges.

Thanks to a very understanding physiotherapy department at G.F. Strong Rehabilitation Centre and the support of my fantastic department director Brenda Tillotson, I was given a two-week vacation, and I parachuted into Portland, Oregon with an ultrasound unit tucked under my arm (the unit compliments of Clyde Smith at U.B.C. Sports Medicine Clinic). I arrived about 9.00 pm March 27th to be greeted by a battle-worn Rick Hansen. We both realized there was a great deal riding on the management of this injury. One week into the tour and we were facing a situation that could, if not treated quickly yet cautiously, result in the dissolution of a lifetime of dreams. 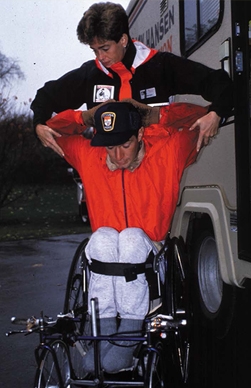 What were the initial obstacles?

I’d say those were substantial obstacles!! We had to endure the painful process of sitting inside a warm, dry motorhome watching Rick in front of us, struggling against the elements. Such frustration knowing there was only so much we could do to help; the rest was up to Rick and Rick alone. Years of training and competition could not have fully prepared him for this kind of marathon. 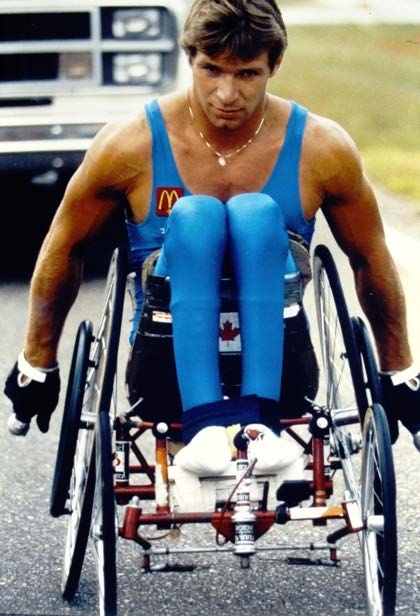 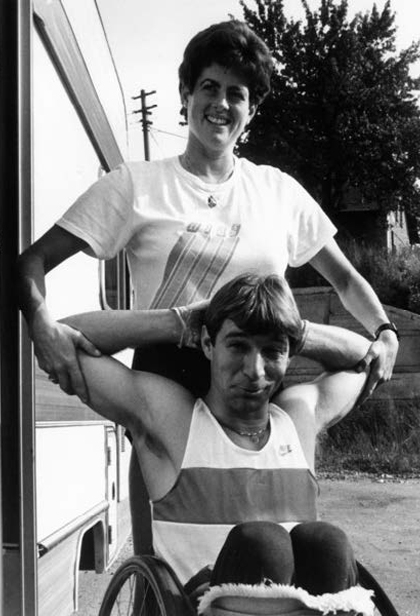 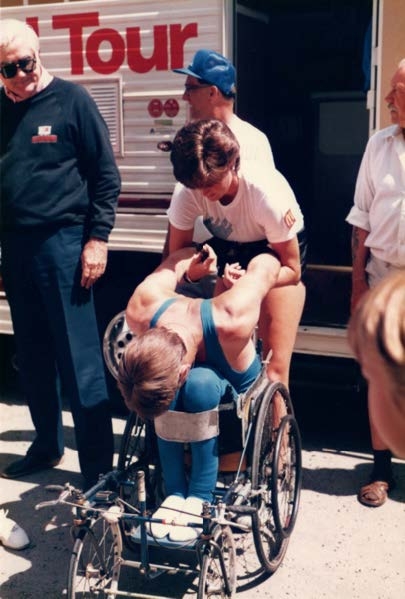 All images are courtesy of the Canadian Museum of History.

The crew initially consisted of five people, and as you are probably realizing, my short notice vacation became an over two-year commitment. The other four members were a cook, mechanic, tour manager and an advance person. Don Alder, who was a musician by training, a lifelong friend of Rick’s, and the young man that was in the accident with Rick in 1974 when he sustained his spinal cord injury, became our wheelchair mechanic. He knew nothing about wheelchairs but ended up becoming an expert! Lee Gibson, Rick’s cousin, was the cook and nutritionist with no background in either but the heart to learn. Tim Frick, Rick’s racing coach and best friend, became tour manager. And finally, Nancy Thompson, recruited from her work with BC Sport, became our advance person. At times, if not all the time, we felt understaffed. Not enough time in the day or enough of us to go around. Somehow we managed to flail from one crisis to another, but alongside the toil and trouble was a lot of excitement and adventure. This experience served to change us as individuals while building a closely-knit, tightly bonded team.

Now that you have had a taste of this epic adventure read the full story here -  Physiotherapist in Motion: Exploring New Frontiers 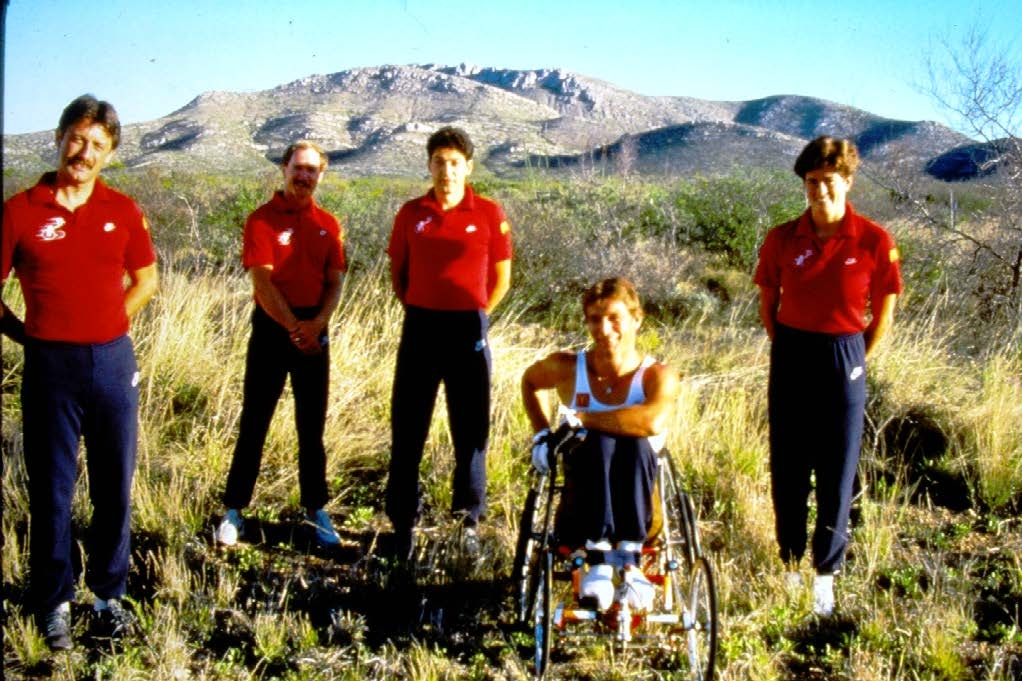