Mrs. Fortune had led two successful Re-entry programs through B.C.I.T. in the late seventies. However, by the mid-eighties, there were an increasing number of vacant physiotherapy positions throughout the province of B.C. Many physiotherapists who had either graduated from UBC or emigrated to BC in the seventies had left the profession, often stopping work to marry and start a family.

The College of Physical Therapists of Alberta developed a self-study program using tutors and clinical placements in hospital settings with the Checklist of Clinical Performance developed and copyrighted by Joan Loomis. It was agreed that British Columbia would conduct a Pilot program of the Alberta program, and an Agreement was made to run the Pilot Program under the auspices of the Open College, at the Open Learning Agency (OLA).

“Open learning is considered by outsiders of BC as a distinctive feature of the BC post-secondary system. The Open Learning Agency in BC has played a significant but perhaps not well-recognized contribution to the BC system. On June 1, 1978 the Open Learning Institute (OLI) was founded by the provincial government as a non-profit, fully accredited institution under the College and Institute Act, thus the legacy of Open Learning in B.C. began. On April 1, 1988, the OLI combined with BC’s educational television broadcaster, the Knowledge Network of the West Communications (KNOW established in 1980), to form the Open Learning Agency (OLA) through the passing of the provincial legislation, Bill 58, The Open Learning Agency Act. [The BC Open University (BCOU) and the Open College were Divisions of the OLA.] The OLA had partnership arrangements with BC Institute of Technology (BCIT) and colleges, playing a pivotal role as a supplier of technological education and in laying a foundation for BCIT’s own degrees.”

In 1988, as part of the Health and Human Services distance learning programs at the Open College, there were already programs for Nurses and Dental Hygienists, so it was considered a good fit to include the Re-Entry program for Physiotherapists. A Joint Industrial Adjustment Committee was formed with representation from BC Health Association (BCHA), PABC, APMP Part 1, Open College Component of OLA, Federal Government: CEIC Labour Market Services, Provincial Government: Ministry of Advanced Education and Job Training. Communication between the various factions was via meetings, Canada Post or by telephone in those days.

Patricia Grohne was hired as the pilot project coordinator and Shawn Skribe became the Clerk/Typist for the PTRE Program at OLA. A notice was sent out to all the hospitals in BC calling for tutors in March 1988.

Four tutors were hired, Lynn Barton (Port Alberni), Pam Irwin (Campbell River), Shirley Bambury and Vera Ashmore (Vancouver). All tutoring was done by telephone/mail and because of the strict copyright agreement from Alberta, the tutors laboriously transcribed their comments and sent them back to the students by mail. Happily, these transcribing issues would not arise nowadays with our ubiquitous access to information through the internet. There was no email back then!

A letter was sent out to all the Hospital Physiotherapy Departments in BC to request their help in advertising the course. Twenty students were initially registered to take the course. In the end, three dropped out. One of those was a hobby dairy farmer and her workload (including milking the cows), made it difficult to devote the time to her studies. Another Physiotherapist, Shelley Terriff, was hired back at St Paul’s Hospital after completing only one module. Unlike the other Re-Entry students whom had been out of work for much longer (one for 18 years), Shelley had been out of the work force for just under five years and still retained excellent clinical skills.

“Much of what passes for health care policy debate these days is impoverished as a result of overlooking the reality that many of the same issues have been examined before. The fact that the context of past discussions is different from today does not diminish the valuable nuggets of learning that could enrich our current search for solutions.” Kevin Evans, CEO of PABC Excerpt from CEO’s Desk, March Update 2016 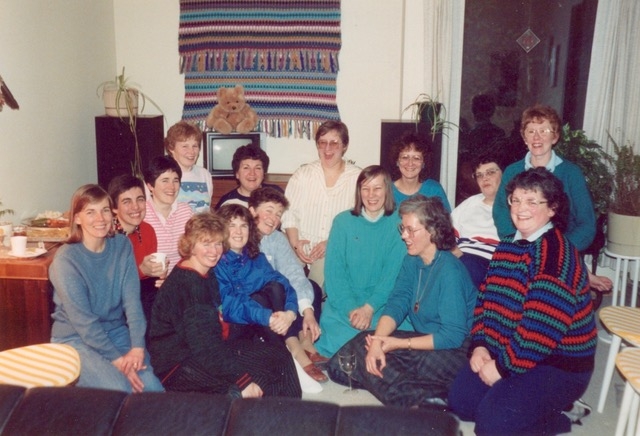 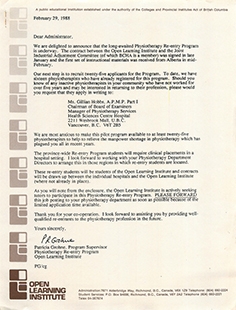 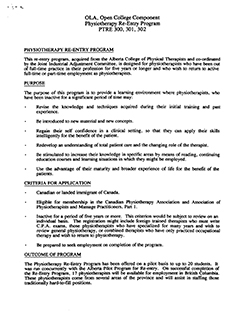 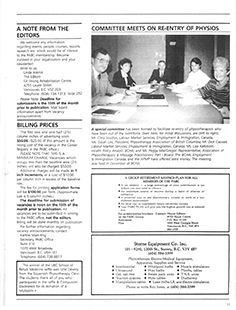 Click on the images above to see the full documents