The 40s and 50s marked an important time for PABC – we officially became incorporated!

In 1944, Dr. H. H. Milburn, a renowned medical doctor at St. Paul’s Hospital suggested the BC Branch of the Canadian Physiotherapy Association apply to be registered under the Societies Act in B.C. This registration would enable the association to have an official voice as a legally constituted organization. In January 1945 the official application was filed, and the first meeting of the newly incorporated branch took place in February. Under the terms of the Act, the Provincial Secretary appointed three members to the first Board of the ‘Association of Physiotherapists and Massage Practitioners of BC’ – Mrs. D. Archer. Mrs. Astell and Miss Liberty became the first of many members who would watch closely the interests of ‘Chartered Physiotherapists’. On October 25th, 1945 it was recorded that the “final wording of the Bill has been agreed upon”. 1945 also marked the end of WWII and a booming economy in B.C. There were many PABC members who had been serving overseas in military hospitals, and they were returning home. Their work with veterans overseas and now at home brought an increased awareness of the benefits and uses of physiotherapy. Because of a nationwide polio epidemic during the 1940s and 1950s, physical therapists were in greater demand in British Columbia than ever before. Physiotherapists moved from Eastern to Western Canada and many others emigrated to Canada from the Commonwealth and overseas. This created a surge of new members, and by 1947, the branch membership was 54.

1950 moved the association to a national level as Mrs. Rosamund Bailey, Vice-President of the CPA, extended an invitation to PABC to host the 1951 Annual Congress in Vancouver. In May 1951 the 5th Annual Congress of the CPA was held in Vancouver with the theme ‘The Third Phase of Medicine’. Also, in 1951, Mrs. D Archer became the National Vice-President making her the first BC member to take the honor. By 1953 membership had risen again to a staggering 147, a number that must have seemed incredible to the founding members.

Founded in 1917, Workers Compensation Board (WCB), now known as WorkSafeBC, saw the millionth claim in 1947. That same year, WCB rehab services, previously based in the basement of VGH, moved with the administration to a brand-new location at 657 West 37th in Vancouver. Literature, posters and films providing ergonomic advice were produced. In 1978, the WCB Rehabilitation moved to the present world-class facility at 6951 Westminster Highway, Richmond B.C. The role of physiotherapy and occupational therapy in the educational aspects of the prevention of injuries continues to this day.

Watch the WorkSafeBC’s Centennial: The Second Quarter Century (1942-1966) YouTube. This informative video captures the period where many men and women were injured in war-related jobs, trade jobs and covers the growth of WorkSafeBC post-war. New policies and processes were established and included rehabilitation to assist injured workers in successfully returning to work. 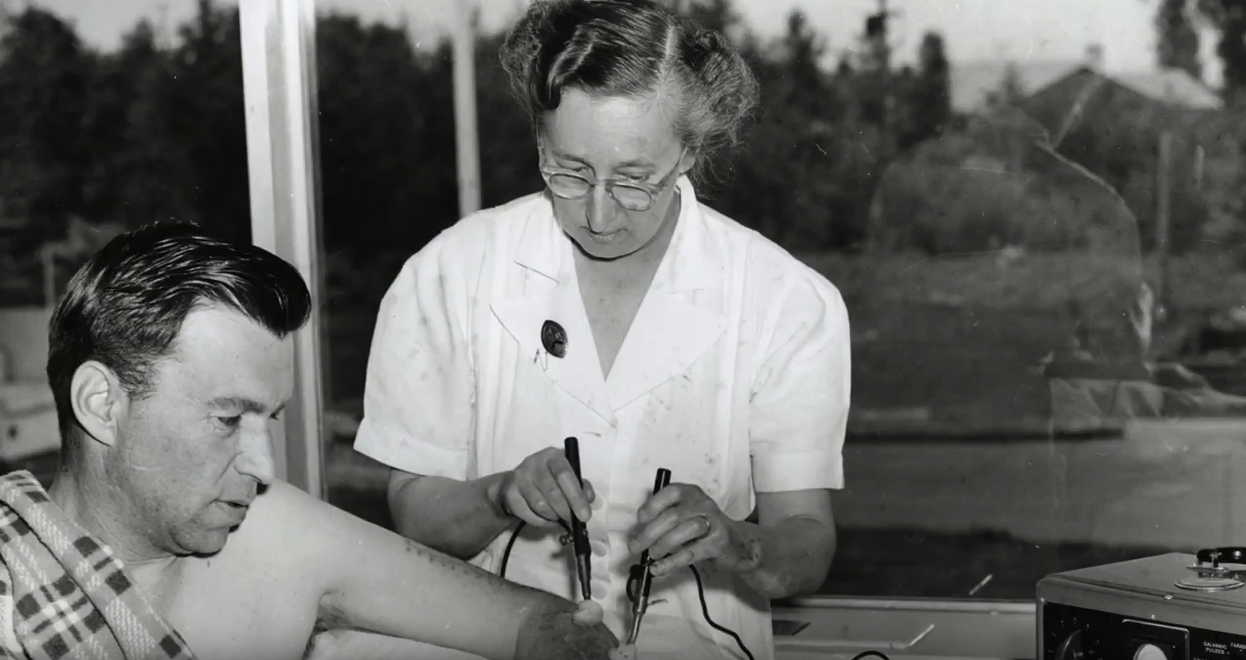 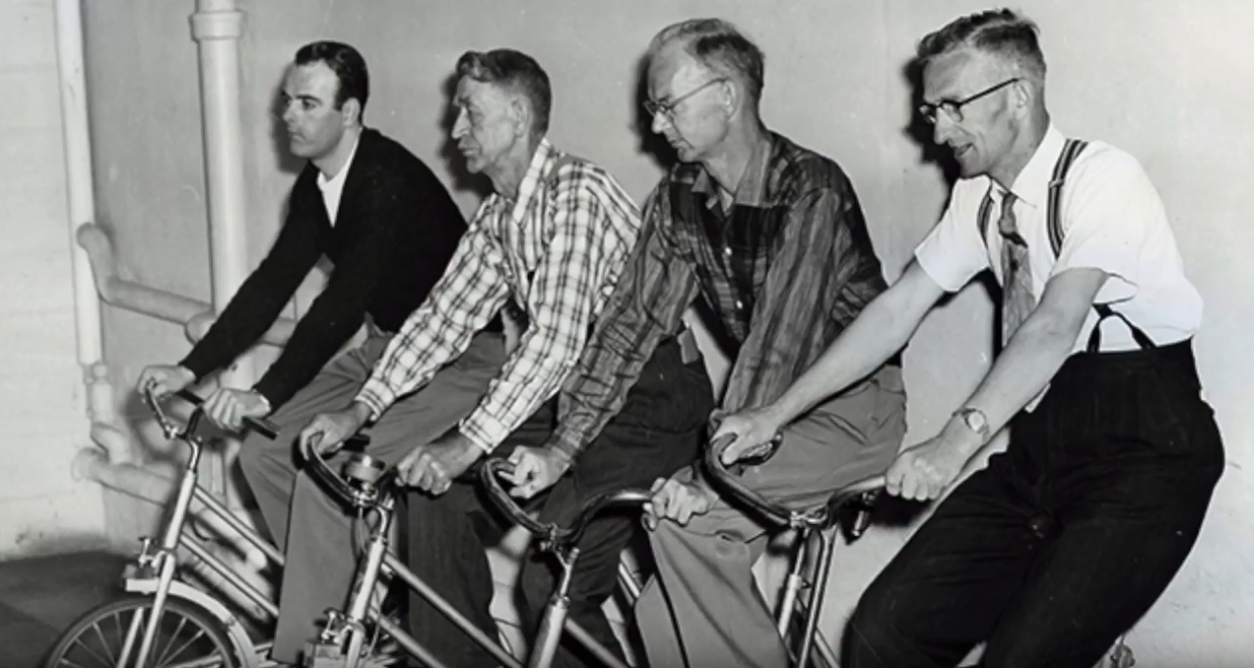 Workmen rehabilitation circa 1947. Photo courtesy of WorkSafeBC’s Centennial: The Second Quarter Century (1942-1966). See link above for the full video

Prior to the opening of the school at UBC there were
only 150 physical therapists practicing in BC, of which only 32 were trained in Canada.

After WWII there were many soldiers returning to BC with disabilities but no facility to accommodate their recovery.
Dr. George Frederick Strong was an advocate for the building of a rehabilitation centre in BC and opened the G.F.Strong Rehabilitation Centre in response to his daughter sustaining a spinal cord injury.

Mrs. Ruth Fortune was a long-time member of PABC, a Lifetime Member of CPA. She was one of the first physiotherapists to work with Mary Pack, the founder of Canadian Arthritis and Rheumatism Society (C.A.R.S), which played a huge part in bringing physiotherapy to patients throughout British Columbia  BC.

Read more about their lasting legacy for physiotherapists across BC, Canada, and the world

*More about APMP - Association of Physical Therapists and Massage Practitioner

Sir Roger Bannister, the first runner to break the four-minute mile barrier, died on March 4, 2018 in Oxford, England at the age of 88. Bannister first broke the record back in 1954. A few months later he repeated the sub-four-minute performance at the British Empire Games in Vancouver, narrowly beating Australian John Landy. The race, dubbed the Miracle Mile, was an international sensation and considered one of the most memorable moments in Vancouver sports history. 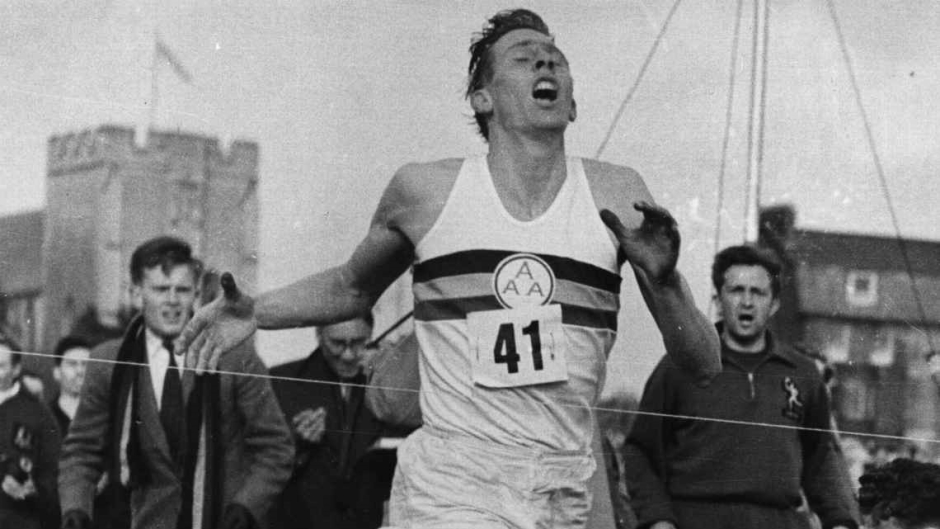 In 1898, the Victorian Order of Nurses (VON) opened in Vancouver. Lady Aberdeen had founded an order of visiting nurses in Canada in honour of the 60th anniversary of Queen Victoria’s ascent to the throne. In the nineteen forties and fifties, the VON provided much-needed physiotherapy services to patients at home, especially in isolated areas. Our current coordinated home care programs all had their earliest origins with VON Canada.

Prior to the introduction of the Salk vaccine in 1955, hundreds of British Columbians contracted poliomyelitis and the severe cases were treated at Vancouver General Hospital (VGH) and at the George Pearson Hospital. The 264-bed building originally opened on May 14, 1952 as George Pearson Tuberculosis Hospital to treat people with tuberculosis (TB). In 1955, the Polio Pavilion was added for patients with poliomyelitis. There were some patients living in iron lungs at Pearson and at VGH for decades. In the 40’s and 50’s, physiotherapists worked daily with the polio patients to improve respiratory function, prevent deformity and retain flexibility. 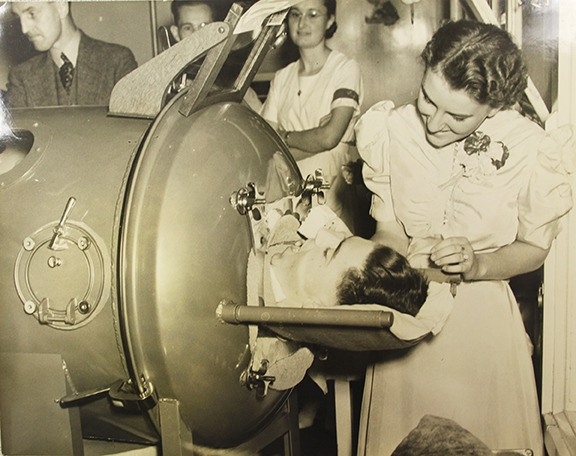