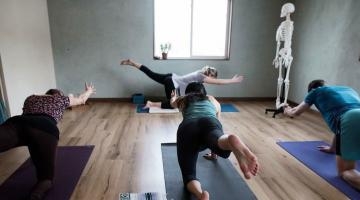 When Kristie Norquay graduated from the University of Manitoba with her Bachelor of Medical Rehabilitation in Physical Therapy, she felt there was more to her patients’ pain and injuries than just a physical component. “In school we learned about assessing and treating the physical body, but there wasn’t as much about the biopsychosocial side of things.”

Kristie worked as a physio for two years, but still felt like there was a missing piece in her practice. A yoga enthusiast, she began to see a natural connection between yoga and physiotherapy. “It’s all just movement. Yoga really connects the body with the mind, which goes hand in hand with physio.” Following this, Kristie decided to go to India and complete her yoga teacher certification.

Now in Golden, she says the biopsychological connection and mindfulness of yoga is an essential tool in her physiotherapy practice. “Tools like meditation and breathing techniques have such a physical impact. Peoples’ bodies improve as their minds improve. In physio lots of people in pain just completely check out of their bodies. By combining physio and yoga, it slowly gets them back into their bodies and trusting their bodies again,” Kristie explains.

Kristie now owns Golden Lotus Yoga Studio, where she combines her yoga and physio training by offering group physiotherapy yoga classes as well as individual physio yoga sessions. Combining the two allows her to not only treat someone’s injuries, but also strengthen people’s minds and attitudes towards their bodies.

Susan Stolberg was first introduced to physiotherapy in 2013 when she tore her lateral collateral ligament, but at the time, her understanding of physio was limited. “I used to think of physio as, ‘when a problem occurs physio will help you deal with it’. I did the exercises that I was given, and wore the knee brace and everything and it did mostly fix my knee, but I honestly preferred other modalities, like massage therapy,” says Susan. In February 2018, Susan started seeing Kristie, and her perception of physiotherapy completely changed due to one unique aspect of Kristie’s practice: physio yoga.

“Kristie suggested I give it a try, and now I’ve been going to her physio-yoga classes and doing one-on-one sessions with her for six months. I’ve noticed that since I’ve been doing it my whole body just feels better,” says Susan. “I’ve become much more body aware.” She says that Kristie’s combination of physiotherapy and yoga has helped her see the entire field in a new light. “The profession is so much broader than what I thought it was. And it’s a great way of avoiding invasive options like surgery. Now I know that there are other ways to help me get better.”

Although Susan’s knee is mostly healed at this point, she says she will continue to see Kristie and attend physio yoga classes. “Physio has taught me that I’m a lot more in control of my body than I thought I was. By paying attention to it more, I still have that power to make positive change in my body. It’s not aging and saying oh I’m falling apart. I have more control,” Susan reflects.

Kristie finds real value in her practice. By teaching her patients more about mindfulness and the mind-body connection, she hopes to help them attain a higher quality of life. Kristie’s goals reach beyond the daily grind, “You don’t want people to just be enduring their daily existence. You want people to be finding joy and happiness in their bodies, that’s really what it’s all about for me.”