Physiotherapists and the Early History of Health Sciences Association

Physiotherapists and the Early History of Health Sciences Association (HSA)

In 1971 rumours began to circulate among working physiotherapists that there was movement taking place towards unionization of Health Care Workers in Vancouver, BC, Canada. I, Bruce Clark, was working at the Workers Compensation Board on 37th Avenue, Vancouver, at the time. On staff, in the clinic, at WCB we had perhaps 22 physiotherapists, 8 occupational therapists,12 remedial gymnasts and 12 industrial therapists. Most of the staff were foreign-trained and immigrants to Canada and I think it fair to say were concerned about unionization, most being probably conservative in political persuasion.

To understand the rationale for the beginnings of this endeavour, you need to understand a little Labour Law, as it existed at that time. A contract can be written in a positive or negative manner with respect to a given group of workers. The contract may say that a given union has authorization to represent a certain profession such as the nurses for example. It may alternatively state that the certification applies to all workers in the facility except a stated exception.

At Lions Gate Hospital, North Vancouver, in 1971, there was one group of unionized people, the International Operating Engineers Union (IOEU), and their certification specifically stated who their membership included, the operating engineers. There was also the Hospital Employees Union (HEU). HEU represented many hospital employees, including orderlies, kitchen staff, cleaning staff etc. and their certification gave them the right to represent people in the hospital with the exception of those otherwise covered, such as the engineers above. Each member paid $5 per month to HEU, deducted at source from the members’ paycheques.

In 1971, at Lions Gate Hospital, HEU looked about and noted that there were a significant number of unaffiliated health professionals, who at $5 per month per member were ripe for the picking. The HEU certification said, you HEU have authorization to represent people working at Lions Gate Hospital with the exception of those represented by the IOUE and the nurses (a negative certification).

With perhaps 20 in physiotherapy, 10 in occupational therapy, 30 in the lab, 15 in radiology, 8 in social work, 20 in dietetics etc. this represented many $5 per month members to HEU and so they set about signing up members.

Madge Wiesman was the Director of Physiotherapy at Lions Gate Hospital and Madge saw that colleagues in other locations were apprised of what was going on, i.e. Joan Johnston at St. Paul’s, Pam Jeacocke at Vancouver General Hospital.

The word spread quickly around the professional community. HEU were on a roll of signing people up and it appeared had every right to do so.

A concern was that HEU had a membership of over 10,000 individuals, meaning that the couple of thousand physiotherapists would be small minority and would not have the ability to carry much weight on the issues that were important to them. HEU members were not all University or Community College trained professionals involved in providing direct patient care. Many physiotherapists would have rated items like education leave a priority in a bargaining environment, a view possibly not shared by the majority of HEU members for example.

As the days progressed, the inevitability of unionization of the Lions Gate Health Professionals looked more and more likely. The question then became – We can either be absorbed into HEU or form our own Union. The latter option while not appealing to most was preferable to the alternative.

Kit Farrar who had been a Dietitian at Lions Gate Hospital was hired as the first Executive Director and she in turn hired a couple of staff who were Labour Relations Officers. Maureen Whelan and Sheila Begg (Social Work) served in those roles. There were a couple of office staff and premises were located on the upper floor of a building at the foot of Homer St., Vancouver, British Columbia.

HSA would negotiate with the Health Labour Relations Association (HLRA). Malcolm Wilkinson was the HLRA individual dedicated to dealing with HSA. John Baigent was contracted by HSA as their lawyer who would spearhead the first contract.

Members interests from 9 disciplines and multiple locations around British Columbia, were represented by an Executive Council with 9 members. David Rushworth was elected as the Physiotherapy Representative.

Many meetings were held around B.C. as the initial contract was developed. Typical issues of a labour contract involved vacation entitlement, hour of work, sick leave, salary scales etc. One issue was unique to HSA and may remain a one and only in all the world. Members for a variety of reasons were opposed to strike. They felt they had a responsibility to their patients first. A No Strike clause was included in the HSA contract. Unions generally saw the withdrawal of service as their prerogative in achieving their desired ends.

The HLRA negotiated with other unions including HEU, IOEU and the Nurses in a traditional manner and HSA was usually given a similar settlement to that negotiated by those ahead of them. This benevolence continued in the early years but eventually attitudes changed, and HSA removed its no strike clause.

From the 9 disciplines that made up the founding group, in 2020 HSA now represents about 150 different health disciplines.

The First 25 years: A chronicle of the Health Sciences Association 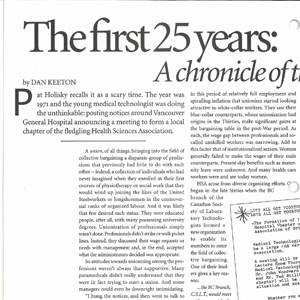