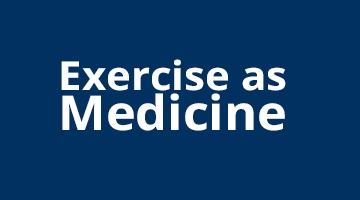 What if doctors could write a prescription that would slow the growth of cancer, treat depression, prevent cognitive decline and help patients live longer and stronger?

They can, according to Australian physiologist and professor Prue Cormie, whose research has led the Clinical Oncology Society of Australia to recommend exercise be added to the treatment regime of cancer patients. And not just any exercise, like strolling down the block or popping into the gym once is a while, but an individualized program tailored to the disease and delivered by physiotherapists or exercise physiologists.

“Based on the scientific literature we now have available we know withholding exercise from cancer patients is harmful,”

said Cormie, in Vancouver recently to speak to oncologists and other medical professionals at the invitation of the University of B.C. and Vancouver’s Prostate Cancer Supportive Care program.

“We know they will experience worse cancer-related fatigue, worse functional decline, worse psychological distress and they’ll have a lower quality of life. Undoubtedly if we could capsulate these effects and put them into a pill you would prescribe it to every single one of your patients”

she told an audience of health-care practitioners at the B.C. Cancer centre in Vancouver. McKenzie’s work inspired the global Abreast in a Boat, movement that has grown to 120 teams from all seven continents.

“Physical activity has been overlooked and underutilized in the management of patients with cancer” McKenzie, who was traveling in Europe said in an emailed response to questions.“Fortunately exercise is gaining some traction in the health care professions; physical activity should be standard of care.”

McKenzie said there is a also a very strong case supported in medical literature for extending the idea of exercise as medicine to other chronic conditions and diseases. Currently much of the research has involved patients being treated for breast, prostate or colorectal cancer but exercise has proven to have a positive benefit with other cancers and in the general population. In her paper on The Impact of Exercise on Cancer Mortality, Recurrence, and Treatment-Related Adverse Effects, Cormie reviewed 100 studies, involving thousands of patients whose exercise behaviour was assessed following a cancer diagnosis of any type.

“Compared with patients who performed no/less exercise, patients who exercised following a diagnosis of cancer were observed to have a lower relative risk of cancer mortality and recurrence and experienced fewer/less severe adverse effects” Cormie wrote.

Despite Canada’s pioneering role in the field of exercise as medicine, in Australia it is more widely accepted and recognized.

“I think that North America has done, and continues to do, a very good job conducting longitudinal trials and other research that supports the integration of physical activity into patient care,” said McKenzie. “What Australia has done is a terrific job of implementing this information into practice. You need both: evidence-based medicine applied to patient care.”

McKenzie said Canada urgently needs to follow Australia’s example, where exercise is part of the treatment regime of cancer patients and public health care covers five sessions with an exercise physiologist or physiotherapist.Training is part of the solution.

“We need to provide the necessary training for clinical exercise physiologists and establish professional standards and credentialing,” McKenzie said. “These individuals can then deliver these services to the general public in community centres, gym facilities, fitness clubs, et cetera.”

UBC associate professor Kristin Campbell is in the University of BC’s Faculty of Medicine physical therapy department. Her research, which has focused on women undergoing treatment for breast cancer, has shown patients who are prescribed exercise and a healthy eating program as part of their cancer treatment benefited in physical, emotional and mental well-being.

“For some people, heading to the gym was definitely not the first thing they wanted to do,” Campbell said. “But what we hear from women is that even if exercise wasn’t top of mind and they were a bit concerned about doing it in the first place, they found it to be really beneficial.They had a lot more energy than they thought they would have otherwise, even on days when they were feeling terrible they didn’t want to go to the gym. They left with a lot more energy once they were there.

The effect was more than physical. For women in the program it was a chance to get together with others going through the same experience, or similar experiences. As much as family and friends are well meaning and they want to be supportive they don’t know exactly what it’s like to be in their shoes,” Campbell said. “At the gym, they are with women who are going through the same journey.”

Cheri Van Patten, a research and clinical practitioner at B.C. Cancer in oncology nutrition, was co-lead with Campbell in the study on the impact of exercise and nutrition on women undergoing breast cancer treatment.

“We’re trying to help bridge the gap between literature that shows exercise and nutrition is effective as an adjunct to cancer treatment and the lack of programs in place.

It is inspirational to show that other countries have moved the needle over to actually embedding this service into comprehensive care, such as Australia.

They’re definitely leading the way and it’s a model we would like to emulate here. It’s is not a one-size-fits-all prescription, nor does just any exercise do."

Cormie said studies show there is a relationship between the quality of the exercise — how good it is and how hard it is — and the benefit.

In Vancouver, Campbell is conducting a study into the impact of a structured exercise program, either during or after chemotherapy, on cognitive function. In what often is referred to as “chemo brain,’’ cancer patients have reported cognitive side effects from treatment.

“Women who are going through chemotherapy for breast cancer tend to report changes in cognition,” Campbell said.

“They can’t multitask the same way, word finding is a bit difficult they just have problems recalling names, things like that, they just don’t feel as sharp.

Whether it’s the chemotherapy itself, anxiety around having the diagnosis, all these things play a role potentially.”

Campbell said her research team has done one proof-of concept study to see if exercise would be a benefit and a second larger study is underway now, aiming to enrol 84 women,

Aaliya Merali-Dewji is an exercise physiologist and the co-ordinator of the cognitive study. Women in the study go to a gym in Vancouver three days a week and carry out individualized programs under supervision. For Merali-Dewji, the positive effects are obvious in the gym.

“It’s like a medicine in that it can improve the efficacy of the chemo, the drugs they are taking, their recovery, their overall mood and fatigue,” she said.

“Fatigue is a big thing when you are getting chemo and exercise can attenuate that.”

Cormie said based on all the scientific evidence, it is clear exercise:

“should be on the agenda of specialists. It would be malpractice if we had a drug like this and it wasn’t being used.”